With Spring Training upon us, baseball fever has risen dramatically.
The countdown to opening day has begun. And many players will be
fighting for their baseball lives. In this report INSIDE PITCH will
re-examine a rule that has major ramifications on a team’s final 25-man
roster. Today, we look at the oft misunderstood "Options" rule.

As the 2007 season approaches, fans will hear over and over again this sentence,           "Player A has a better chance of making the opening day roster than Player B because he is out of ‘Options’." So, how many "Options" does a player actually have and how does this rule work?

When a player is originally drafted by or initally signed by a team,
a clock begins to run. This clock is the first rule that a fan has to
follow if they want to understand how "Options" work. The player is
under the team’s complete control for the first three years (four years
if player signed is younger than 19 years old). If the player is not
added to the 40-man roster after three years (or four years for younger
players) he becomes eligible for the Rule 5 draft. This draft allows
other teams to sign the player if they are willing to keep him on their
major league roster or DL for the entire year. Though, if their use of the DL is limited, as he must be active for at least 90 days.

Now, once a player is added to the 40-man roster, a second clock
begins. This is the "Option Years" clock. This means that when a player
is on the 40-man roster, teams have the option of calling that
player up to the major league team and sending him down to the minors as
many times as it wishes for THREE YEARS.
If a player on the 25-man major league roster (who has "Options" remaining)  is never sent down to the minors in a given year, then a team retains however many "Option Years" it has left until the team has used all of them. After these three "Option Years", the player is considered to be "Out of
Options" and may not be sent down without going through Waivers.

Usually when fans get confused, it is when they think that a team only has a
certain number of times they can call up and send down a player in any
given year, or they don’t realize that the three "Option Years" do not
have to be consecutive. To highlight this last point, let’s use Ryan Zimmerman as an example. In 2005 Zimmerman was added to the major league roster at the same time he was added to the 40-man roster. Even though he has been on Washington’s 40-man roster for two full seasons, the Nationals still have all three "Option" years left to use since they have never sent Zimmerman down to the minors.

The reason for the "Option" rule is so that players who
are blocked in an organization eventually are given a chance to pursue
their careers with another organization where their might be a better
major league opportunity for them. Another way to look at the rule is as a protection for the player. Teams are prevented from stashing a young talent in the minors for as long as they want.

If a player is on the 40-man roster for THREE YEARS and never put on the major league roster in that time, he gains a FOURTH "Option" year.

DL rehabilitation assignments are not counted as an "Option".

If a player is sent to the minors for less than 10-days in each stint, it is not considered an "Option".

If a player on the 40-man roster is sent to the minor leagues in spring training, it counts as an "Option".

A player with five seasons of major league service time or more (calculating MLB service time is a topic for another blog) can refuse an
"Option" to the minor leagues even if the team hasn’t used up its
"Options". An example would be Roger Clemens (supposing he plays this
season). Clemens has never been optioned to the minors. But, because he
has more than five seasons of MLB experience a GM could not option him
without his permission.

Also, even if a minor leaguer is not added to the 40-man roster,
after six years he has the option of becoming a minor league free-agent.

The Case Of Oliver Perez

There has been much confusion in the New York media lately as to whether Mets’ pitcher Oliver Perez is "Out of Options" or not. Some are even confused as to why he had any "Options" remaining last year. If one reviews the rules I have layed out, including the Caveats, then the answer is clear.

Oliver Perez is "Out of Options" beginning this season. The reason for some of the confusion is because many don’t realize that 2005 didn’t count as an "Option" year even though Perez pitched part of the summer for the Triple-A, Indianapolis Indians. The time he spent in the minors that year was considered part of his DL rehabilitation assignment. I have listed that as Caveat #2. So if we review Perez’s flow of movement from the minors to the majors, we can see that 2002 and 2003 (where he was called up from the minors and sent down from the majors) were counted as his first TWO "Option" years. Since Perez spent no time in the minors in 2004 and the time he spent in 2005 was part of a DL rehab assignment, 2006 (when he spent much of his time in the minors after being sent down by the Pirates) was his FINAL "Option" year.

Here is a list of some players who should or could make their team’s
25-man major league roster because they are "Out of Options": 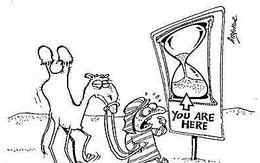 For any of you box score mavens who might have missed this little tid-bit, Derek Jeter’s 22-game hitting streak lives on (1 for 5 tonight), even though he went hitless Tuesday night at the Stadium, because of an obscure rule in MLB’s rulebook.

Rule 10.24 (b) states that "a consecutive-game hitting streak shall not be terminated if all the player’s plate appearances (one or more) results in a base on balls (BB), hits batsman (HB) or a sacrifice bunt (S). The streak shall terminate if the player has a sacrifice fly (SF) and no hit…." .

So, as far as the streak is concerned, Tuesday night never happened. For the record, Jeter officially had 4 plate appearances in yesterday’s game- 3 walks, 1 hit by pitch and 0 hits before Torre lifted him in the 7th inning. I guess Joltin’ Joe’s spirit will have to look over his shoulder for at least one more game.

* This rule did not exist in Joe DiMaggio’s day.

If you had two umpires regulating a baseball game, as most lower level minor league games do, and one of the umpires had to leave in the middle because of injury or illness, what would you do? How about calling on a couple of players from the home team to be replacement umps.

That’s exactly what happened on August 11th in a South Atlantic League (A-ball) game at Delmarva. As the sixth inning concluded with Delmarva beating West Virginia 10-1, home plate umpire Dan Oliver started to feel the ill-effects of post-concussion syndrome— the result of a grade two concussion he had suffered a couple of days before. Oliver had to depart the game, leaving base umpire Tim Bretzke in a lurch. Instead of umpiring the rest of the game on his own, Bretzke decided to use a couple of players to cover for Oliver. According to West Virginia Power GM Andy Milovich, this incident had precedence from a year ago, and the officials of the South Atlantic League had informed umpires it was okay to use players to fill in if a situation like this should arise again. So, Bretzke delegated Delmarva outfielder Daniel Figueroa to umpire first base, and Delamrva pitcher Josh Potter to umpire third base.

At this point West Virginia protested, but not because of the Delmarva players being assigned as umps, but because they thought that Dan Oliver, still suffering post-concussion syndrome, was unfit to umpire the game in the first place. Supposedly, Bretzke was going to have one player from each team umpire, but West Virginia manager Ramon Aviles was so upset that Oliver had been allowed to work the game that he told Bretzke to just go ahead and have the Delmarva guys do the job.

There were no controversial calls for the rest of the game and Delmarva went on to win 12-3. While we are still awaiting word from the South Atlantic League Office on this
matter, according to a veteran minor league official scorer,
normally in this occurence the remaining umpire would finish the game
by himself. However, it should be noted that each league is independent
and has its own set of rules for situations like this.